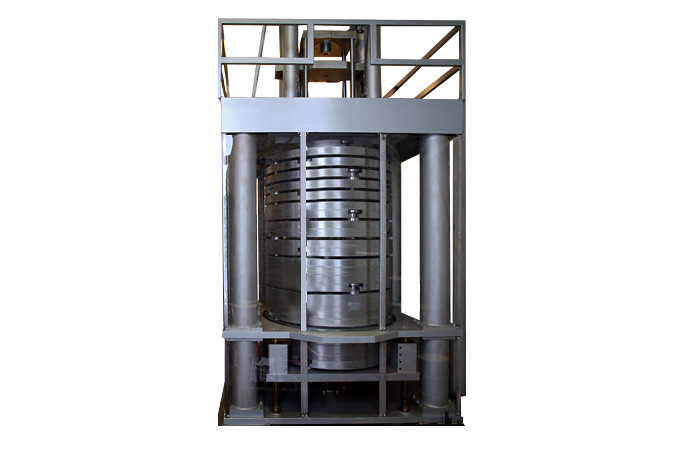 Explanation;
Esit Dead weight force standard/calibration machines are produced for the calibration and/or testing of the force measuring devices (force transducers, dynamometers, force sensors, load cell, proving rings and etc) both in tension and compression mode precisely. Deadweights (masses) are used for the generation of forces for the application of calibration loads with the lowest uncertainty. Austenitic non-magnetic stainlesss steel or nickel coated steel materials are used for the production of mass discs (dead weights). The test spaces are in accordance with international standards (ISO 376 and ASTM E74). Â

Force standard/calibration machines with dead weights gives the most accurate result in all the other kinds of force generating machines. Thus these systems has a wide area of use especially for the primary level standards for the national metrology institutes and also for the calibration laboratories, force releated production companies, load cell production companies, testing and certification bodies, fluid mechanics laboratories and etc. Â

The national metrology institutes (NMIâs) and seccondary accredited calibration labs needs to calibrate force measuring devices with the lowest uncertainty having Class 00 according to ISO 376 or Class AA according to ASTM E74 or other international standards. Â  Esit Dead weight force standard/calibration machines may be controlled eighter fully automaticaly or manually so that the user may eiter run the pre-programmed calibration/test sequence or custom/spontaneously desired Calibration/test procedures. Esit can produce custom dead weight standard/calibration machines due to special needs and purposes of the user. The adjustment of the deadweights and the mass of equipment that must be considered, is performed by the national metrology institutes or accredited calibration laboratory according to EN 17025. The material and shape and dimensions of the deadweights are carefully determined for the intended use and uncertainty of the machine.

In order to access this document you must login!